On November 5th 2011 Tooele Democrats showed up in force to help local resident Dani Thomas and her family raise money to “kick cancer’s can”.    We began by shoveling snow from the sidewalk at Parker’s Park.  We brought our Canopy, some tables and chairs, 216 bottles of Soda, and 2 portable fire-pits to help out at this event.  Luckily, the sun broke through and our fire pits weren’t needed.  After the carnival and race course set-up were complete, the Tooele Democrats, led by Kendall Thomas and Valerie Lee (seen below), began blowing up balloons to sell for a special ceremony at 11AM.  After a brief speech in memory of Cancer Survivors everywhere (and remember that even cancer victims are Cancer Survivors) all the balloons were released into the air.

After the ceremony, races, and carnival concluded, the Tooele County Democrats were also there to help clean up.

Despite, the cold weather preventing us from being able to raise as much as we would have hoped, we are proud of what we were able to accomplish.

If anyone is still interested in donating to Dani Thomas, please go to http://kickingcancerscan.blogspot.com/ and click on the donate button.

This 5K run/fundraiser began in 2010 with a fund raiser to help the loved but now late Candice Heaps with her battle, and is now intended to be an annual event to support Tooele’s beloved neighbors and Cancer Survivors.  The recipient of this fundraiser will be selected prior to the race each year.

Thank you again to everyone who came out to support this endeavor.  Thank you for “Putting People First”! 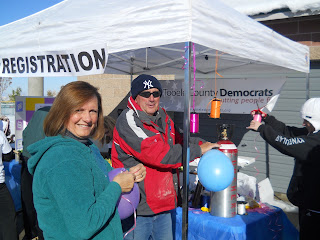 Posted in Featured Story, Past Events
Scroll To Top