[box type=”shadow”]I meant to post this earlier, its an email from our state chair, Jim Dabakis and he touched upon it again last night at our convention. Denice, a Tooele resident, was at our convention last night, and I’m awestruck by her courage and her willingness to stand up for what’s right.[/box]

This email might be a bit longer than usual, but this story needs to be told in full.

This is a story (compiled by Eric Ethington) I wish every Utah voter would read. It moved me. Told in full for the first time, it is a sad story about a faithful employee, a hard-working Utah woman, who was crushed by the machine. 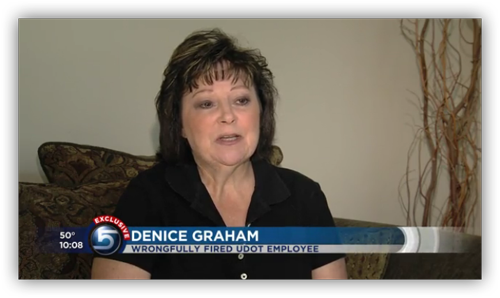 An ADMINISTRATIVE JUDGE RULED that UDOT “exceeded the bounds of reasonableness and rationality,” and firing her “amounts to an abuse of discretion.” The Governor, the Attorney General and the head of UDOT chose not to appeal the decision.
An Average Utahn Caught In A Republican Political Scandal

What happens when an average, everyday Utahn gets caught up in the middle of a Republican political scandal? Nothing good. Just look at the story of Denice Graham and the lives that were hurt because a campaign needed someone to blame.

In December of 2009, the Utah Department of Transportation (UDOT) was getting ready to award a bid for a billion dollar contract for the I-15 construction project in Utah County – the largest single contract ever given by the state of Utah.

On December 2nd, 2009, Denice Graham, a mid-level manager at UDOT, was called by Laurie Wadsworth from Provo River Constructors, one of the companies bidding on the project. Laurie told Denice that she was hearing from several other bidding companies that UDOT had finalized their decision and had selected competitor FSZ as the winner of the contract. Denice looked on UDOT’s public website (emphasis on public) and confirmed what Laurie could have looked up for herself, that it appeared FSZ had won.

Concerned about the call, Denice immediately went to her boss, Kris Peterson, who at the time was the UDOT Director of Construction Materials. Peterson told Denice that the information was not supposed to be public yet, and that his office had failed to place a block on that section of the website. Peterson said that the public shouldn’t have seen the information yet, and then instructed Denice and all of her employees to not talk to any of the bidding companies until he had fixed the mistake.

Meanwhile, Laurie Wadsworth had contacted her boss with the information from UDOT’s website, who, in turn, reportedly contacted both Mike Deavers, with Governor Herbert’s campaign, as well as Herbert’s Chief Of Staff.

Within a short time, the winning bid was not FSZ’s, but Provo River Constructors – who had coincidentally donated over $80,000 to Governor Herbert’s campaign. Additionally, a $13,000,000 payout had been made to FSZ to “avoid a lawsuit.”

For nine months, the public was not made aware of any of this, and life went on as normal for Denice at UDOT until September of 2010, when the scandal broke in the media during the final months of the Herbert vs. Corroon gubernatorial campaign. Answers were demanded of Governor Herbert as to why Provo River Constructors got the contract and why $13M had been paid to a losing bidder (none of the other losing companies had received any payments). Herbert claimed that he didn’t know anything about the payout. John Njord, the head of UDOT, was also questioned about who authorized the $13 million and he announced an ‘investigation’ by UDOT was underway to determine what had happened.

This is where Denice Graham found out what lengths a political campaign will go to in order to duck the swinging sword of negative public opinion. John Njord and UDOT came back to the press after his “investigation” and announced that a person to blame had been found. It was not Njord’s fault, even though he oversaw the bid and the payout process, nor was it Director of Construction Materials Kris Peterson’s fault, even though he was the one who let confidential information be posted publicly on the company website, nor, coincidentally, was it the fault of any other high-level UDOT official.

Instead, Njord blamed Denice Graham, the mid-level manager who had no say or authority over the bidding process or payments. UDOT and Governor Herbert quickly claimed that because she had given out proprietary information (reminder: the information she gave out was already posted publicly), the whole thing was Denice’s fault, and she was immediately fired. As far as Governor Herbert and UDOT were concerned, the responsibility had been placed with Denice– that was the end of scandal.

But for the Graham family, the next year became a nightmare. Fired, UDOT denied Denice, an employee of 11 years, unemployment benefits and refused to give her any form of recommendation. Denice and her husband, both in their 50′s, found themselves without their primary income just as they were getting ready to retire. Unable to find another job, and living off the salary of her husband’s letter-carrier job provided, Denice pursued the only avenue left open and hired a lawyer to fight back.

Without Denice’s income, the only purchases she and her husband have been able to afford in the last year were groceries and the basic necessities. They skipped birthday and Christmas presents for their children and grandchildren, they had to sell off personal possessions, and were forced to borrow from family members just to keep their electricity on. The stress got so bad that Denice has been under the care of doctors because her health is at risk.

It’s taken a year, but last month an administrative judge finally ruled that Denice wasn’t guilty of any wrongdoing and UDOT was ordered to reinstate her to her position. As a matter of fact, the Administrative Judge and Commission said that UDOT’s decision to fire Denice “exceeded the bounds of reasonableness and rationality and amounts to an abuse of discretion.”

But the tale doesn’t end there. Despite the judge’s strong words and the difficulty caused to a loyal employee, UDOT has not apologized for the trauma and nor has UDOT welcomed back a great employee. To the contrary, Denice has been informed that while UDOT will comply with the judge’s order in the sense that they will reinstate her to the same position title, she has been stripped of all her previous responsibilities and staff and relegated to an entirely different department. UDOT is also refusing to pay Denice any back-pay from the year she was out of work, even though the judge ruled that UDOT was wrong to terminate her in the first place.

Utah Republicans are constantly selling the tale about Utah being the “Best Managed State” in the nation. But what’s so “Best Managed” about a Governor giving out a billion dollar contract to companies that gave him more than $80K in campaign contributions, and then his Department of Transportation paying out $13 million in what appears to be hush money? What’s so “Best Managed” about John Njord, head of UDOT, authorizing the $13 million in payouts (supposedly without the knowledge of either the Governor or the Legislature) and shifting the blame for the mess to a powerless mid-level manager?

Before the firing, Denice Graham and her husband were getting ready to retire. But now, because she unfairly found herself in the center of a Republican political scandal, her family is facing more than $40,000 in legal fees, thousands of dollars of debt to family members, and zeroed-out retirement accounts that will now force them to work for the next 20 years to try and build the account back.

As for those who are actually responsible for the bid appointment and the $13,000,000 in what looks like a hush-money payout? Governor Herbert is still the Governor. John Njord is still the Executive Director of UDOT (where he makes $239,000 per year), and Kris Peterson has been promoted to Division Director ($179,000 annual salary).

Denice does not stand alone. If you’re as angry about this story as I am, please forward this email to your friends. Post it on Facebook. Get this story out – people need to know what happened to Denice Graham in Governor Herbert’s administration, and under John Njord’s watch. Please help us stand behind Denice Graham, and do what we can to right this wrong.